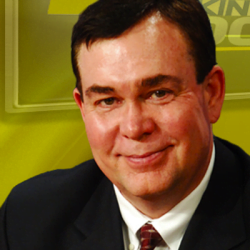 Tony Barnhart never set out to become “Mr. SEC,” let alone “Mr. College Football,” the sobriquet he earned during a 30-year writing career, first at the Atlanta Journal-Constitution and, since 1994, as go-to SEC guy for ESPN and later CBS.

Back in 1976, Barnhart – now part of the SEC Network and aiming toward Aug. 28’s football debut of Texas A&M at South Carolina – was another recent University of Georgia graduate. Then as now, there was a recession, and jobs – especially in newspapers, most especially covering sports – were few and far between.

“I graduated June 10,” Barnhart said, laughing at the memory, “and I saw a 3-by-5 index card (on a UGA journalism-school bulletin board) that said the Union (S.C.) Daily Times needs a sports writer.”

On June 11, he spoke with Union editor Don Wilder, who asked, “When can you get here?”

“I’ll be there tomorrow,” Barnhart said.

That next day, after a couple hours’ conversation, Wilder reached into a desk drawer, withdrew a sheath of papers and told the wannabe reporter, “I’ve got this many applications, but I’m going offer (the job) to you right now.”

Flash forward to this year. Barnhart, who departed the Journal-Constitution in 2008, turning his part-time TV gigs with ESPN and CBS into a national profile among college football fans, signed on with the fledgling SEC Network, where he’ll make – well, considerably more than $125.

It was a no-brainer, he says.

“It was one of those things, when I learned the SEC Network was about to become a reality, and they said, ‘Is this something you’re interested in?’ I said, ‘Yeah.’

“CBS was very good to me” – Barnhart was part of “College Football Today” from 2004-2013 – “but the chance to get in on the ground floor here is sort of cool,” he said. “The SEC is on an incredible run in all sports (especially football), so to be in at the beginning of the network, helping shape it … I’m honored to be a part of it.”

The SEC Network could hardly call itself that without Barnhart. Starting as the AJC’s Georgia beat writer (1984-85) and moving on to be its national college football writer, no reporter in America has been more closely identified with the conference – not even his new colleague, longtime Alabama radio talk-show host Paul Finebaum. When Barnhart recently filled in for the Controversial One on his national radio show for two days, it looked to be a seamless handoff.

In fact, Barnhart said, laughing, “after doing it for four hours (each day), I have even greater respect for Paul.

“The ‘traffic cop’ aspect (of fielding callers), getting into commercials (and) setting things up – he makes it look easy. It’s not.”

The SEC Network plans on Barnhart doing a multitude of cross-media jobs, from pregame studio work to writing a weekly Friday column for SECSports.com. He also returned Aug. 11 to AJC.com, writing columns Mondays, Wednesdays and Fridays. He has his own site, tonybarnhart.com; and does “a little radio” in Atlanta.