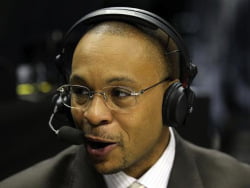 Gus Johnson is stepping down as Fox’s lead soccer announcer.

Johnson told Sports Illustrated that with full college football and basketball schedules, he couldn’t devote the time to soccer that being a lead broadcaster demanded, and contacted Fox Sports president Eric Shanks and requested that he be pulled off the assignment. Shanks agreed.

“I think that it was a mutual decision, but maybe I was the guy who came to it first,” Johnson said.

Johnson also said that his decision was influenced by the loss of his mother, Btroy Johnson, who died of ovarian cancer on June 7. Johnson last spoke to his mother when he was in Lisbon for the Champions League final between Real Madrid and Athletico Madrid.

Johnson also told Sports Illustrated that he asked his mother if he should return home to be by her side, but she refused.

“I asked her if she wanted me to come home and she said, “No. You are a Johnson man and your job is to work.”I finished the game, got back home, and she was pretty much unconscious at that point because she had Stage Four ovarian cancer. I never got the chance to talk to her again because the cancer was eating her up. I think I’m still in the process of healing. My mother was the most important person in my life. She is the one who gave me my love for sports and communication.”

In the intervening time, Johnson has also gotten engaged. In the same interview, he intimated that the wedding is set for August 1, which is also his parents’ anniversary.

“I want to hang out with my wife and that is where I’m at,” Johnson said. “I don’t want to be exhausted, tired and unprepared. What I realized about calling soccer and especially international soccer, I needed to do 35-40 games just to get my bars up and my chops going.

Shanks also spoke to Sports Illustrated, and confirmed that he and Johnson saw eye-to-eye about what Fox Sports needed in a lead soccer announcer.

“We talked about everything he is going through with his mother, getting engaged, and Gus is a single parent sharing custody of his son. Where Fox Sports is now is different from when we asked Gus to do soccer. To be as good as Gus wants to be at soccer, he would have to be full time on it.”

Shanks also said that he still wants Johnson to call some soccer games, and neither Johnson nor Shanks would rule out the possibility of Johnson broadcasting some 2018 World Cup matches, though he would not be lead announcer. Johnson will also not serve in that role for the 2015 Women’s World Cup.

Credit to USA Today who originally published this article