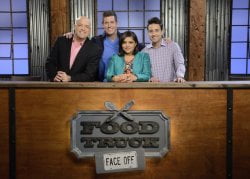 As anyone who has listened to Steak Shapiro on sports talk radio over the years knows, he loves food. He would wax romantic about the Palm and even opened a restaurant Stats while with 790/The Zone.

He has also started a food-oriented media franchise “Atlanta Eats,” which includes TV, radio and on-line features about local eateries. And he is now going national as a judge on Food Network’s latest competition show “Food Truck Face Off,” which debuts Thursday at 8 p.m.

His life has rebounded nicely since he was ousted last year from the 790/The Zone morning show after that now infamous Steve Gleason ALS bit that went viral in a very bad way  and got him,Chris Dimino and Nick Cellini fired. He has been building his food credentials and nabbed a gig at his old enemy sports talk station 680/The Fan late last year.

Food Network was fishing around for new personalities and found a video of Shapiro doing a pre-Falcons show with local chef Kevin Rathbun. They then found his “Atlanta Eats “show. Last year, they shot a pilot for “Food Truck Face Off” for Food Network’s sister station the Cooking Channel.

The reaction was so positive, they moved the show to the Food Network and shot 13 more episodes from four cities: Austin, Miami, Toronto and Los Angeles. Shapiro spent a lot of time on the road while hosting his Front Row sports talks how remotely.

The concept is a bit like “Shark Tank,” Shapiro said. He and two judges take food truck pitches from four teams who want to break into the business. He, Chicago restaurateur Alpana Singh and a rotating third judge pick the best two. They then fly to the city where the teams are from and have them compete for use of a food truck for an entire year. The judges at that point do a lot of coaching.

Shapiro said he is comfortable expressing his opinion after decades of doing so on the radio. “To me, it doesn’t matter if it’s where Jason Heyward should bat or what the best dumplings are in town. I could talk about Neapolitan pizza, then Matt Ryan.“

He and Singh, he said, are very much opposites. “She has a more sophisticated palate than I do,” he said. She owns restaurants in Chicago and has hosted her own TV show there for many years.

Singh, in a separate interview, said their dynamic is a bit like the old “American Idol” combo of Simon Cowell and Paula Abdul.

“We became fast and easy friends,” she said. “There’s a natural chemistry between us. He sort of looks at me and says, ‘Why are you so harsh?’ ‘I’m not being harsh!’ “

She calls him very intense, very direct, yet “very personable, very curious.” Yet deep down, “he’s a big softie.” She also noticed that he types on his keyboard really really hard. When she made this observation, he said, “There’s nothing soft about me.”

During an episode where an Austin duo were selling food in an edible bowl, Shapiro was skeptical. “What do I care about eating a bowl? I want to eat what’s’ in the bowl and I want it to be tasty!”

Singh also found him to be a great coach for the would-be food truck owners. “He gets out there and pushes them,” she said, “because that’s what he does in his own life.”

The timing of the show is great for Steak, whose fifth season of “Atlanta Eats” debuts this weekend Saturday and Sunday mornings at 10:30 a.m. on Peachtree TV. He is also promoting the first Atlanta Eats Live event Sunday, October 5 at Verizon Wireless Amphitheatre featuring an all-you-can-eat deal with one ticket from places such as Kimball House, Muss & Turners and Iberian Pig.

Credit to the Atlanta Journal Constitution who originally published this article