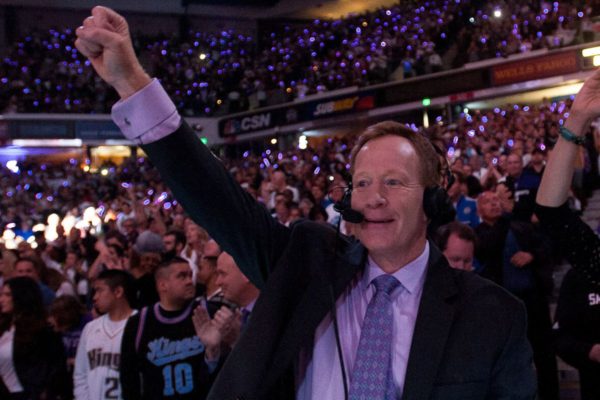 TV voice of the Sacramento Kings and local afternoon radio host on 1140 KHTK, Grant Napear has been placed on administrative leave by the station after responding on Twitter to the Black Lives Matter movement with “All Lives Matter.”

“Grant Napear has been placed on administrative leave while we are investigating the statement that was made on Twitter,” Ross said.

The statement came during an exchange with former Kings center DeMarcus Cousins, who reached out to Napear, looking for a response from the sportscaster regarding the BLM movement.

The “all lives matter” reaction to BLM generally represents a misunderstanding of and contempt for the movement. Napear admitted as much during an interview with the Sacramento Bee Monday morning.

“I’m not as educated on BLM as I thought I was,” Napear said. “I had no idea that when I said ‘All Lives Matter’ that it was counter to what BLM was trying to get across.” Beyond the interview with the Sacramento Bee, Napear continued to address the “all lives matter” statement on Twitter.

In response, Cousins tweeted that he wasn’t surprised by Napear’s take, while Chris Webber and Matt Barnes also reacted to the Twitter exchange. “Would expect nothing less from a closet racist,” Barnes wrote.

“Grant’s recent Twitter comments do not reflect our organization’s views and values,” the team said of their play-by-play voice. “We are reviewing the matter further with our broadcast partners NBC Sports California and Sports 1140 KHTK.”

This was not the first time Napear had a Twitter exchange with Cousins. After Cousins criticized Toronto Raptors fans for cheering as Kevin Durant needed to be helped off the court in Game 5 of the NBA Finals last year, Napear followed with a harsh response.

“If there is any player in the NBA that should not be talking about fan behavior, and about how they treat athletes as opposed to people, it’s DeMarcus Cousins,” Napear said last year. “This guy is the rudest, crudest, most vile player that I have ever been around in my 31 years of covering the NBA.  He should not be speaking on this in any way shape or form.”